The Random, Uncensored Musings and Writings of Eliza Winkler

This morning I picked another zucchini from the garden that was longer than my kitchen knife, and there’s another on the plant that will be there in another day or two. With more rains to come, there are soon going to be more zucchinis to pick, and that means one thing: zucchini bread! 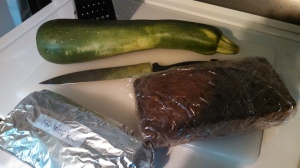 My fiancé doesn’t like zucchini but he does like the bread, so yesterday I whipped up a batch, which made two loaves. One for Dylan, and one for him to take in to work to share with his coworkers. With this latest one I picked, I think I’ll try another recipe, one that includes crushed pineapple. I’ll have to watch it though, because I can get myself in trouble with dessert breads like this. I like them too much and love to snack on them when they’re available. This batch I think I’ll make into muffins instead, so I can freeze them. That should keep me from accidentally eating them as I wander by the fridge, and they’re be easy to bag up and put in my lunch for a snack at work.

The number of zucchinis hasn’t yet gotten to the point that they’re coming out my ears, but that’s because so many of them have begun to rot on the vine before they have the chance to mature (I’m not sure why they’re doing that…but I rather suspect it’s because of how much rain we’ve gotten recently. I could be wrong though…). To be honest, I wouldn’t mind getting to that point, but I can wait. Once the tomatoes start to ripen, we’ll have more of those than we know what to do with!

One thought on “Zucchini Season!”

Where I Socialize in the Virtual World: